Wanted to show off a small example of my Baserow plugin, which introduces language translation capability. It’s a very small example but it took me a while to get there, many thanks to @nigel and @petrs

Besides translation, other functionality such as dictionary lookup will be supported. My plan is to eventually have a full featured app which can be described as a “spreadsheet for language learning”. There will be a free tier, and a paid tier (which unlocks access to premium translation service such as DeepL).

While it’s easy to get a one-off translation on the web or on mobile using google translate, people who are learning languages need to be able to build and maintain lists of vocabulary and sentences and annotate them in various way. They need import/export functionality, some users may want to import into flashcard software. Language teachers who work online will also benefit from having such a tool.

This is pretty creative use of custom fields!

This is awesome @lucw, thanks for sharing.

This looks amazing! Very excited to try this out

Here’s a step by step video that I made for my users who study or teach Chinese: 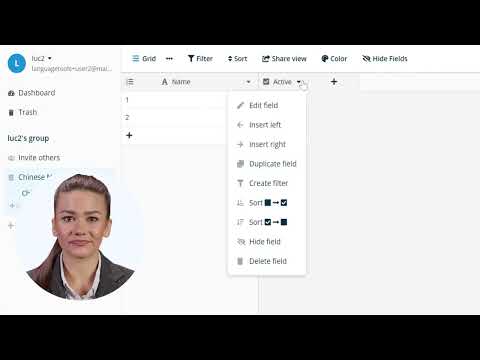 I’m going to start gathering user feedback on my current prototype. At some point i’ll have instructions on how to install this plugin, however it’s not 100% straightforward as it requires some API keys for paid cloud services (google, azure), so i’ll need a little bit of time.

Hey @lucw, looks great! How are you going to start gathering user feedback, do you plan to have a specific group or channel for that?

I maintain a google sheets addon which has some overlap in functionality with this baserow plugin, so I’ll be recommending this to some users.